A tale of courage and a voyage through time

6 June 1944, 0:02: Roger Englin is aboard an aircraft headed for Normandy. He is seventeen years old and has a mission to accomplish.
31 May 2014, 15:12: Cédric Roussel is coming back home from the high school where he teaches history. He does not know it yet, but he has a mission to accomplish.
6 June 2014, 0:02: Théo Roussel turned eight years old two minutes ago. He will think about his party later on. Now, he has an appointment. And a mission to accomplish.
A paratrooper receiving his baptism of fire. A father who has never gotten over his greatest heartache. A young boy fighting his fear. Three people separated by space and time, yet thay have something in common: a wristwatch, lost on D-Day and rediscovered seventy years later in an auction house catalogue.
It is Cédric who spots it on the internet, finding out that he more than anyone has a good reason to bid for it. Can it really be mere coincidence? The answer is a date with destiny that will challenge what he thought he knew of his own life.
Wingwatch is a tale of courage, a bridge between the heroes of yesterday and those of tomorrow, a voyage through time in the company of that most classic of time machines: a watch, whose rusted hands and faded dial measure more than just the limited span of a minute, an hour or a human life. 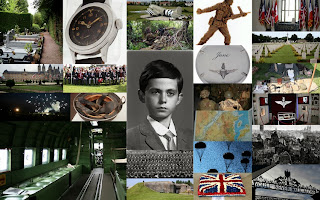 Where you find Wingwatch
The eBook is on sale at amazon (mobi/Kindle), kobo (iOS, Android and Windows devices), Barnes&Noble (Nook devices), iTunes (Mac and iOS devices), scribd (Apple, Android and kindle devices), 24symbols, Playster.
The paperback version is  available at amazon. This edition includes over 130 pictures and additional contents.